Song and dance of the Bulbul

Bulbuls [F.Pycnonotus], especially the one called the red vented bulbul are present all over the country, both in urban and rural setting. But I rarely have seen this bird in the developed localities of the city. Therefore when I heard the fruity whistle repeated over and over with ten second intervals, I was thrilled. I rushed outside to see where the song came from. I was rewarded in the sense the bird [did she know?] flew in from a tree branch and sat on a TV antenna, 15 ft from where I stood. She proceeded to preen herself and did two to three turns so that I can have a good look at her physical attributes. This done she proceeded to sing a few notes, stood still for a few seconds and flew away. This morning too I heard her notes and saw her at a distance alighting on a nearby coconut tree.

Why was I so happy? I am happy at the sight of any bird even the common place crow. But the arrival of the bulbul was special. I had not seen a bulbul in my backyard in the many years I have been here and neither have I heard her song. The sighting on two successive days in the breeding season meant there in nesting activity and this bird has chosen this area and thus a new life has arrived in my locality. From an environmentalist’s point of view we have not done too badly.

My warbler friends arrived a bit late this year but what a relief it was to see them and listen to them. So my dear readers, all is not lost as yet!


Boom bloom of the Climatic


There is a plant nursery a few kms away from my home, managed by the physically handicapped, where I occasionally go. When I went there 6 months ago I saw for sale, a creeper plant [name Climatic] with a few white flowers that I liked. I bought three of them and planted them in the plantar box which borders my rear balcony. They grew slowly in the beginning and rapidly two months back and showed signs of budding a month ago. When they flowered they shook me with their extravagance. The before and after pictures are of two of them. 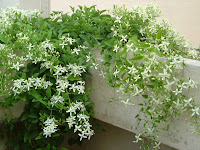 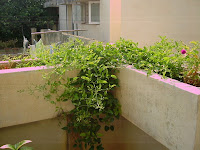 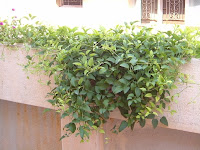 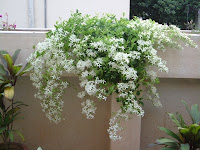 As you can make out, I am just learning how to post pictures and also to how to take them!
Posted by My thoughts at 12:23 PM

My thoughts
I am a 78 year old family doctor with varied interests.I am still in active practice though only for limited hours.I play golf thrice a week with a current handicap of 15. I watch birds when ever I can. I post my random thoughts related to medicine as it relates to people and on general topics of my interest and want you all to respond.